Yes yes yes indeed a new release out documenting my collaboration with mighty folk-rockers from the south of France, Artús. A band spawned from a radical collective of traditional and experimental/rock musicians who possess a strong love of their local music traditions and the Occitan language, Artús welcomed my wife and I with open arms last year while we spent some time based in Toulouse.
It all started one evening when, after getting in touch with singer Thomas Baudoin via email, I headed down to the school of traditional music in Toulouse for a vocal workshop headed up by Thomas. Initially terrified, I sat at the back of the room observing before being urged to come and join in. Having fuck all French to speak of - 5 years of hated French at school paying off as usual - I fortunately found a helpful translator amongst the choir and I joined as the seemingly single bass voice in attempting to belt out some Occitan language polyphony. Surprisingly uplifted by this, I hung around for a bit before Thomas closed up and as planned drove us out to his home on the outskirts of Pau, at the foot of the Pyrenees, some 2 and half hour's drive from Toulouse. A weary drive, we kept awake with passionate discussion in a mix of English and my terrible French about the state of independent music as a practice, and Thomas explained to me his journey into Occitan language and music.
Starting with his father, a prominent folk revivalist who was a member of Canicula a band whose approach to the folk traditions of Gascony echoed the folk revivals happening at the same time in the UK, Ireland and even here in 'Straya, Thomas began at a young age singing around the Bearnaise countryside at village parties and sessions. Within this upbringing was a radical understanding of the history of his region of France, the suppression and attempted liquidation of Occitan culture and language by a French government policy of one France and one language, a history I had never heard of. Speeding through the night we arrived at his home, and in the kitchen chatted more, drinking strong locally brewed moonshine into the early hours. The following day we awaited the arrival of my wife and took a walk in the Pyrenees, staring up at mist-covered peaks, surrounded by neolithic stone circles and shepherds wandering in the hills below. A restful evening followed before heading to Pau the next day to meet Thomas' brother Matèu , fiddle player and singer in Artús as well as a solo artist, member of various of Pagans records (Artús are part of a collective Hart Brut whose record label this be) bands who also crosses over into the similarly-minded La Nòvia collective/label as a member of La Cleda, and their father Jacques Baudoin. At the Baudoin family home we drank coffee and had a session, me trying to keep up with an interesting array of fiddle tunes from the region with some of the most important players in that scene. 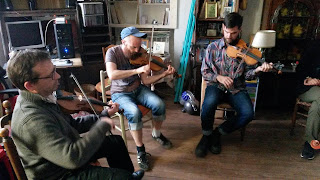 Yep that's me on the right Matèu in the blue hat to the left of me and unfortunately I can't remember the chap in the olive sweater's name but I believe he is one of the leading exponents of fiddle music in the region, and I believe a fellow member of the Pyrenees fiddle music ensemble Ad'arrOn along with Jacques, Matèu and Thomas.

Well, onwards and upwards, we received an hilarious tour of Pau by Matèu during which we were introduced to Artús bassist Romain "Pairbon" Collauti and guitarist/noisemaker/Pagans graphic designer Nicholas "Gogo" Godin over a lethal thing known as "picon-bier". The next day we were to head off fairly early in order to make it to a village in the Basque Country as Artús had a gig at the Müsikaren Egüna festival, in a lineup that also featured Glitterbeat recording artists Iffiqiya Electrique, the only other act on the bill I recognised. On the way we stopped at the Artús HQ, La Ferronerie, an old steel mill in Jurançon converted to a studio, performance and meeting space by the collectives Hart Brut and A Tant Rêver Du Roi who both consist of members of Artús. There we met the rest of the band/collective, packed up the vans and the gear and headed to the beautiful village of Ordiarp in Euskal Herria for the festival.

A brilliant day of food, far-too-drinkable cider and incredible music, I found myself swamped by gingers, my wife, Matèu, drummer Alexis Toussaint, and their sound engineer Benjamin Rouyer who is the spitting image of my brother-in-law. Despite this perilous position the performance by Artús was a revelation, an inspiration, and after almost falling into the creek trying to save a duckling, surviving the cider, and other shenanigans we were whisked post-dinner off to the nearby house of Artús vielle à roue (hurdy-gurdy) player Romain Baudoin, cousin of Thomas and Matèu. Romain kindly gave us a copy of his incredible new solo album Bestiari which showcases a far-reaching virtuosic exploration of vielle à roue and Romain's own instrumental invention the "Torrum-Borrum", a fusing of heavy metal electric guitar and hurdy-gurdy. This is not surprising from a man who loves his metal, and is the son of an instrument maker, his father a maker of the ever important tambourin à cordes or stringed tambourine, wielded with great power by Thomas Baudoin and an important symbol of Occitan folk music.

Shaking off the dust, we headed the next day to La Ferronerie for the planned improvised recording session between myself and Artús. As is typical of these guys, we not only recorded, but sat around, drank wine and ate together, worked as a tribe, a community, towards the result you hear now on Artús & Adam Cadell - Improvisations 21 Mai 2018. Splitting up into various combos, we freely improvised pieces with both electrified and acoustic instruments, often driven by my own weirdo fiddle, and sometimes driven by their deep traditions and motorik rock drive. It was a session of incredible personal importance, and it brings me a great deal of pleasure to share it with all of you nutters via the incredible Pagans records. SO, delve into it, and then dive deep deep deep into the Pagans catalogue, head over to the Hart Brut site  and get yourselves acquainted. Well fucking worth it if I do say so myself.