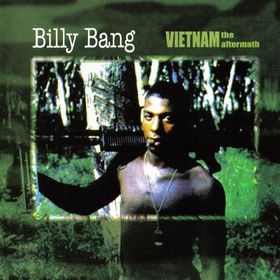 Billy Bang was perhaps the greatest violinist to emerge from the "free jazz" loft scene in New York City. All of his recordings I've heard so far are absolutely beautiful. Find his music and immerse yourself...highly highly highly recommended.

"Bang's family moved to New York City's Bronx neighborhood while he was still an infant, and as a child he attended a special school for musicians in nearby Harlem.[1] At that school, students were assigned instruments based on their physical size. Bang was fairly small, so he received a violin instead of either of his first choices, the saxophone or the drums.[1] It was around this time that he acquired the nickname of "Billy Bang", derived from a popular cartoon character.[2]
Bang studied the violin until he earned a hardship scholarship to a private high school in Stockbridge, Massachusetts,[3] at which point he abandoned the instrument because the school did not have a music program.[4] He had difficulty adjusting to life at the school, where he encountered racism and developed confusion about his identity, which he later blamed for his onset of schizophrenia.[4] Bang felt that he had little in common with the largely privileged children at the school, who included Jackie Robinson, Jr. (son of baseball star Jackie Robinson)[4] and Arlo Guthrie,[2] and he struggled to reconcile the disparity between the wealth of the school and the poverty of his home in New York. He left the school after two years and attended a school in the Bronx. He did not graduate, decided not to return to school after receiving his draft papers,[4] and at the age of 18, he was drafted into the United States Army.[5]
Bang spent six months in basic training and another two weeks learning jungle warfare,[4] arriving in Vietnam just in time for the Tet Offensive.[5] Starting out as an infantryman, he did one tour of combat duty,[4] rising to the rank of sergeant before he mustered out.[1]
After Bang returned from the war, his life lacked direction. The job he had held before the army had been filled in his absence.[4] He pursued and then abandoned a law degree, before becoming politically active and falling in with an underground group of revolutionaries.[1] The group recognized Bang's knowledge of weapons from his time in the Army, and they used him to procure firearms for the group during trips to Maryland and Virginia, buying from pawnshops and other small operators who did not conduct extensive background checks.[4] During one of these trips, Bang spotted three violins hanging at the back of a pawnshop, and he impulsively purchased one.[4]
He later joined Sun Ra's band. In 1977, Bang co-founded the String Trio of New York (with guitarist James Emery and double bassist John Lindberg). Billy Bang explored his experience in Vietnam in two albums: Vietnam: The Aftermath (2001) and Vietnam: Reflections (2005), recorded with a band which included several other veterans of that conflict. The latter album also features two Vietnamese musicians based in the United States (voice and đàn tranh zither).
Bang died on April 11, 2011.[3] According to an associate, Bang had suffered from lung cancer.[3] He had been scheduled to perform on the opening day of the Xerox Rochester International Jazz Festival on June 10, 2011."[6]

Pinched from wikipedia...because it's sunday evening and I feel lazy. Billy Bang deserves more effort so worry ye not there'll be more from me on this absolute legend of violin....
Posted by Adam Cadell at 01:32 No comments: