A new discovery right here on Underground Violin...another true radical motherfucker straight out of Japan. Hideaki Shimada came scraping out of the 1980s Japanese noise multiverse (it seems old mate from Merzbow encouraged him to release his stuff on his own Pico imprint or something along these lines) with his echoing, scraping, chattering, looping, ring-modulated works for solo violin as Agencement. While I ordinarily feel some derision toward some of the Cageian extended techniques that violinists like Hideaki use, he makes it into a glorious cacophony that is truly interesting to behold in your eardrums...You can find a bit out about him HERE and I plan to post plenty more about this man soon... 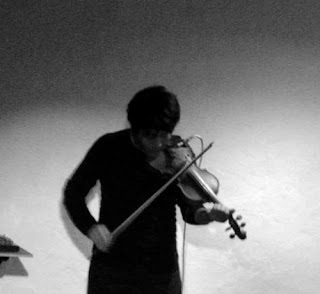 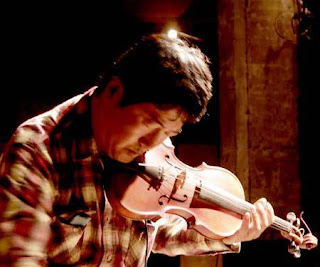 Violin From the Archangel's Thunderbird

While I'm fairly certain I've posted about the genius of Amon Duul II on this blog before...or perhaps at least over at Planet of the Scrapes...I feel that it's important to delve more deeply into their work here - and even more specifically into the wailing, warbling, sky-reaching violin of Chris Karrer. The history of the Amon Duul commune scene - and the excellent bands that were born out of its fecund radical womb in the 1960s - has been covered in detail elsewhere (most notably Julian Cope's amazing Krautrocksampler) so I'll just cut to the fucking chase won't I. Karrer. His violin playing is truly radical and like nothing else out there. Just listen to side 2 of Amon Duul II's seminal Phallus Dei (seen below in a freaked-out live version) for a truly mind-destroying door-growing manifestation of this claim. It's like a gypsy hoedown on the surface of Mars. What if Ludwig Van was born in 1942, ran away from Germany for a while to discover the joys of consuming pounds of hash in some forgotten corner of Morocco, then decided that the piano didn't let him play between the notes enough, picked up a violin, plugged it in through an array of fucked synthesisers and just let it scream? Karrer's playing is unmistakably classical but it's so munted and stoned out that it's like the entire European musical tradition was re-interpreted by some extra-terrestrial being and beamed directly into Karrer's brain. The delay present in a long-distance phone-call comes to mind. In a way this could be said of Amon Duul II in general...they wanted to escape post-war Europe and the guilt of simply being German by making something not made on this Earth...something from another world entirely. Karrer's violin is just that...otherworldly...but full of a screaming desperation that is entirely human. Amon Duul II had the good fortune of becoming a fairly big deal on the live and recording circuit during the late 60s/early 70s, making the radical violin of Chris Karrer perhaps one of the more widely heard examples of a truly mind-altering approach to violin performance. The radical credentials of Karrer's violin are unquestionably strong. The whole Amon Duul concept is deeply radical and truly adversarial in its complete rejection of so-called Western Civilisation. These Amon Duul II fiends still live the commune experiment, still live off-the-radar, still fight the good fight through sound and art. While other German revolutionaries chose to take the great leap into death and destruction, Amon Duul II and the violin of Chris Karrer chose to use sound as their weapon, but perhaps weapon isn't the appropriate word here, I prefer "vehicle". Karrer and Amon Duul II provided a vehicle to reach a better world, a vehicle with no fixed coordinates and no damn plan but to make a better world by taking Earth's inhabitants far out into space and finding a new one altogether. Dial this badboy up to around the 3 min mark to see Karrer pick up his violin if you're attention span is too short to watch the whole thing. It's all brilliant so I recommend the latter. God's Cock...parte 2 is the more violin-orientated one I believe...
Posted by Adam Cadell at 11:31 No comments:

Good morning allllll, So it is with great pleasure that I announce the release of my new solo album 'Til It All Melts Away out NOW on Sydney-based net-label Wood & Wire. You can see what it's all about HERE Radical Violin for red-earth-dirt-road travelling. I would say my finest compositions to date on the solo front and my difficult 5th or 6th solo album....can't remember...lost count. You can find MORE OF THEM HERE 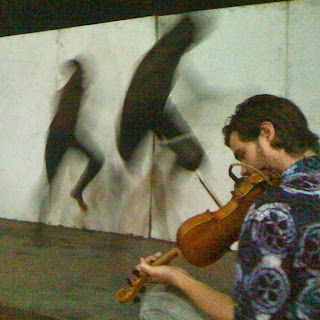 Here I'll embed the player to make it easy for you... Get into it. If you want to bring it out on some sort of platform on your label then get in touch via whatever means possible. The Doctor Accra, Ghana
Posted by Adam Cadell at 05:45 No comments:

This blog is by no means dedicated to the promotion of my own compositions (you can find all that stuff in the side bar here to your right if you really want), but since the Planet of the Scrapes Blog is currently heavily engaged in the promotion of The Songs of Baron Samedi by The Scrapes I feel that this is the most appropriate platform to announce the surprise forwarded release date of my new album "'Til It All Melts Away'" on Sydney online label Wood & Wire. It seems that the beast could well come out next week instead of the original August projected release date. This is, in my humble opinion, my finest work to date and to top it off it's being released for FREE. Here's the blurb I sent the label: Adam Cadell’s ‘Til It All Melts Away…4 compositions inspired by red-earth roads and busted sound systems...monumental, urgent, meditative, angry, gentle, more electronic than any of his previous work...it is evocative of West African sounds filtered through a fucked up lens of Minor Threat and Anton Webern with a dash of Tony Conrad dronathon for good measure. Recorded entirely on a hand-held field recorder in Accra, Ghana and then munted beyond recognition with his trusty laptop, this collection of pieces for violin, gonje, percussion, found sounds and electronics represents part of Cadell’s Radical Violin project. Music against complacency and apathy…music against capitalism and exploitation…music for truth. “Radical Underground Violinists of the world, stand up, take your instruments and your intellects and help build a culture in opposition to the powers that are degrading our disadvantaged fellow humans and making our planet uninhabitable!” Dr. Adam Cadell The Manifesto of the Radical Violinist Will post it up here when it's ready. In further news I also contributed violin to a couple of tracks on the new Jastreb (Croatia) album "Mother Europe", due out in September on HauRuck. Here's a preview where you can hear a bit of my scraping somewhere in there: You can pre-order this magnificent krautrock bastard HERE
Posted by Adam Cadell at 07:07 No comments: